Car Crash Simulator 3D is a free Simulator game for Windows 8 and 8.1 devices. Developed by HungryPixels, this game gives you realistic experience of crashing your car into other cars. With 3D graphics and real sound effects, this game is really fun to play. Fasten your seat belt, and get ready for some action. 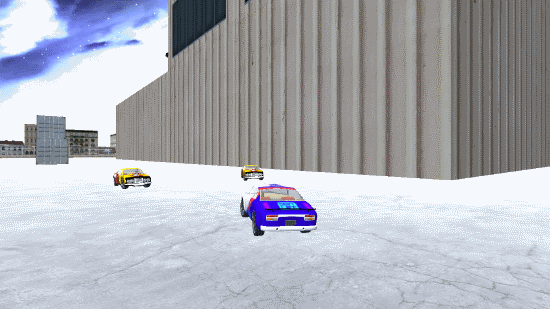 How to Install Car Crash Simulator 3D on Windows 8 Devices: How to play Car Crash Simulator 3D on Windows 8 Devices: As you begin the game, your car appears along with 3 other opponent cars. All you have to do is drive your Blue car, and crash it into the other cars. Control your car with the help of WASD keys. Use Space bar to apply power brake. Crash into other yellow cars as much as you can with maximum impact to damage and disable them. This game goes on for as long as all cars are destroyed. The Split Screen mode lets two players to play and crash cars at a time. If you are wondering how to control both cars, then do not worry. The Blue car can be controlled originally by the WASD keys, while the Red car can be controlled by the Navigation keys. Along with 2 cars that you are controlling, 3 more cars appear which you have to destroy. Compete with the second partner in this exciting mode, and destroy each other’s cars. There is no time limit in any of the modes, so you can take all the time to destroy the opponent’s car. All of this happens in a huge arena, along with different obstacles.

Additional options in this simulator game for Windows 8:

This free simulator game for Windows 8 is an action packed App. Graphics are awesome, sound quality is realistic, and the controls are really easy. Playing this game in split screen mode is really addictive, as you continuously try to defeat your rival.