Army Shooter Force is a free combat game app for Windows 8 and 8.1 devices. Launching the game will present you the main menu of the game itself wherein you can either choose to tweak the settings of the game, start the game etc. When you click on the Play button, you will be brought to the gameplay screen where you play as a ranger who has to kill all the enemies. Your health meter and armor is visible at the top left of the screen, and so is your ammo. At the top right you can see the number of enemies that you’ve killed. Once you clear a level, the new level starts automatically. The game is designed in a third person shooter style and has good graphics.

Army Shooter Force is available for free from the Windows App Store.

Main features of Army Shooter Force for Windows 8 and 8.1…

When you run the game, you will be presented with the main screen of the game which doubles up as its main menu as well. This is shown in the screenshot attached below. Clicking on the Play button in the screen above will bring you to the gameplay interface almost immediately. Apart from choosing to start the game, you can also choose to tweak certain game settings like sound, music, etc. via the settings icon (the gear icon) to the left of the play button. The gameplay interface is shown in the attached screenshot below. 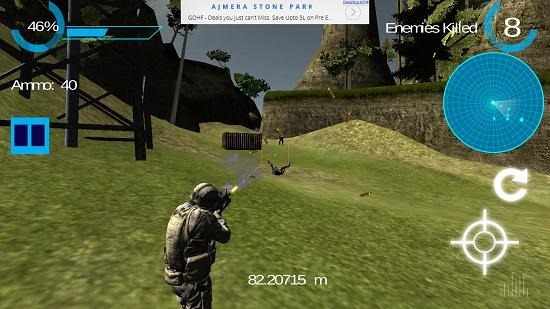 As you can see, you can access the game’s radar where you can see the enemies as white dots. You can also see the available health meter at the top left of the screen, and see your remaining ammunition under the ammo meter. The game is based on the simple WASD controls. These are explained in a little more detail here…

You can also choose to pause the game via either the Esc. key or the big pause button under the health meter. The pause menu also has certain handy options available under it which are shown below. This is a wrap of the main features of Army Shooter Force for Windows 8 and 8.1.

Army Shooter Force is a good combat game which might awaken the inner ranger in you. You may grab it for free from the Windows App Store by heading over to the link below.