Math Rush Basic Operations Lite  is a Windows 8 Maths app. You can use this app to practice your maths skills. Using this app, you can test your mathematical skills for solving the basic mathematical operations, viz, addition, subtraction, multiplication, and division. The app looks more like a game, which you can enjoy while  learning. In this educational app, you have to complete calculations within a stipulated time.

The app has the option to add as many as 4 players, who can compete against each other to gain a better mathematical edge. All the operations have more than hundred levels available to play. As you get to the main screen of the app, the option to name your players will be shown to you.You can add at most 4 players in the app. After you specify the names of the players here, the option to start the game with a specific player will appear on the next page. Choose the player and click ‘Play’ option. After that, the screen to choose the operation for which you want to check your mathematical skills will appear. Each of the operations, viz, addition, subtraction,  and multiplication have 999 levels available, whereas you can play 99 levels in the division operation. 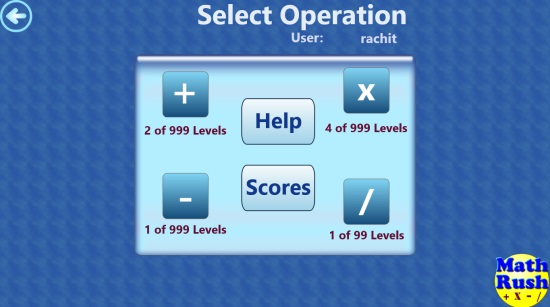 Then you can start the app to test your mathematical skills. The app works more like a game after this. Let me get you a better idea of this Game like  app:

As you get to the main screen, you will be shown a board on which a number of balloons will be displayed. On each of these balloons a number will be shown. In a panel on the top of this board, an operation for which you are testing your skill for, will be displayed, along with an equation. You have to see  by using which numbers and that operator would you be able to get the specified solution.

As you begin the game, a time count, the user name, and the level number will be shown to you. If you click on a balloon, its number would be placed into the equation and the balloons would be eliminated. Once you complete this equation, another will be shown to you. Your aim is to eliminate all the balloons within the time count that is shown. Just keep in mind that if you make 3 mistakes, you will fail.

The availability of hundreds of levels for each of the operations will ensure that your skills are polished.

Math Rush Basic Operations Lite is a nice Windows 8 Maths app to practice Maths calculation skills. You should try it for sure.