Death Race Stunt Moto is a free Racing Game for Windows 8 and 8.1 computers. Do you remember the classic Road Rash game? If you liked it, then you are going to love this bike racing game for Windows 8. Get ready for some thrilling bike ride experience. You do not get just to race, but you can also knock down your opponents. But, that is not all; there are obstacles on the road as well, so BEWARE! How to Install Death Race Stunt Moto on Windows 8:

Developed and published by A V Logix, the Racing game for Windows 8 occupies just 51.8 MB of space on your device. Search for the game on the Windows App store, or simply follow the link mentioned below. Once you press the install button, the game downloads, and installs automatically. How to Play Death Race Stunt Moto on Windows 8:

Click on the Play option on the Home screen to begin this racing game for Windows 8.  The next screen lets you select a desired bike, on which you want to play the game. Click the Next option to toggle between the bikes. Only one bike is unlocked at the beginning of the game. The rest can be bought later as you earn money. Select a Bike, and hit Play again. There are 3 modes to play the game. 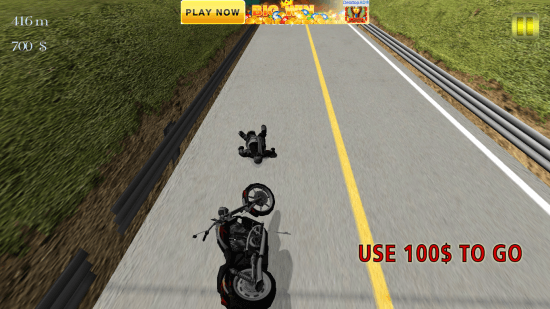 While you play this free racing game for Windows 8, its not only the rivals who are against you. Apart from rivals, who will try to knock you down, you will have to be aware of obstacles. These obstacles can appear on the road any time. Dodge the obstacles, or you lose. Press Space button to perform stunt, and stun your rivals. If you fall down, you get a chance to get up, get back to your bike, and start racing again. If you fall for the second time, the game gets over.

This free racing game for Windows 8 is thrilling, and has to offer outstanding graphics and sound effects. Download and play this Racing game today. Unlock bikes to gain better handling on the bikes, and perform better stunts.