Since the day Microsoft has announced the Windows 8 Consumer Preview version, developers have started upgrading their software so as to make them work fine in Windows 8. Well, this time I am talking about Snappy. Snappy is a free screenshot capturing software for Windows that lets you capture the Computer screen, edit the captured desktop screen, and use it in your presentation or in other important project.

Although, there are thousands of other screen capturing tools that are available to help you capture desktop screen, however, the unique part about this software to capture screen if that, not only does it allow you to capture screen, but also lets you edit the captured screen and make required adjustments such as contrast, brightness, RGB settings, and more…

In addition, another distinguished feature that makes Snappy a unique software is the introduction of a new feature called “Event Capture”. This feature lets you capture screenshots instantly when a particular event occurs. For instance: Snappy can capture the screen when you click the mouse button at a particular area on the screen.

Under the “Capture” navigation bar, there are four different options that are available to help you take screenshot according to your requirement. Take a look over the screenshot below: 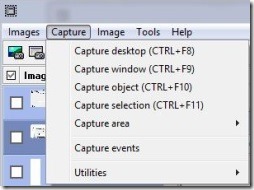 Installing Snappy For Windows 8 To Capture screenshots is as simple as it is to do it in other OS. However, before I get down towards the installation section, let me quickly jot down the main features of Snappy screen capturing software below.

Features Of Snappy For Windows 8 To Capture Screenshots: How To Download Snappy Screenshot Capturing Tool In Windows 8:

Do not miss out other Windows 8 Software reviewed by us.

Yupp…there you are. Go ahead and start taking screenshots of each moment occurring on your desktop screen. Download Snappy for Windows 8 to capture screenshots…