Battle Of Atmosphere Supremacy is an action packed, free shooting game for Windows 8 and 8.1 computers. You are an Army helicopter pilot, and you are on a dangerous mission. Your mission is to destroy the secret army bases located on distant islands. Get into the enemy territory, and burn down their base to ashes before they attack your country. Stay in the air for as long as you can, defend yourself, and return back to go on a mission again. Developed By Rational Games, this Windows 8 shooting game guarantees to thrill you. How To Install  Battle Of Atmosphere Supremacy On Windows 8 Devices:

This 48.3 MB Windows 8 shooting game can be found on Windows App Store. Find the download page link at the end of this article. Click on the Install button to download and install this game automatically. How To Play  Battle Of Atmosphere Supremacy On Windows 8 Devices:

This Windows 8 shooting game is not as tough as other air warfare games. Use the mouse, and the WASD keys to control your helicopter. Left mouse click fires weapon on the target. Click on Play to enter the game. You can choose from 3 various helicopters to play this combat game. The first helicopter is unlocked by default. The other two can be unlocked with the help of cash that you earn during gameplay. 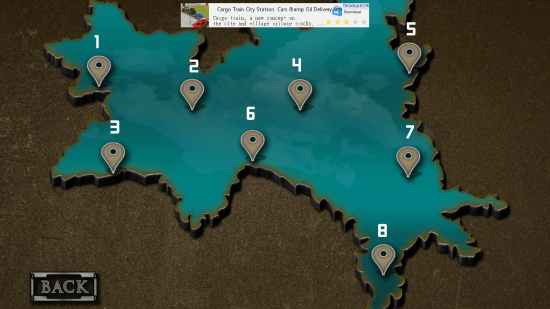 Select a level from the given map. Begin playing this shooting game with Level 1. View the mission objective before you start playing this shooting game for Windows 8. The game begins with your helicopter in the air, from where various islands are visible. Locate the enemy base, and move towards it to destroy it. Once you are close enough, aim at the base, and open fire to destroy every possible target. Click on the screen to fire  continuously. You can play this shooting game for Windows 8 with different viewing angles. Click on the camera icon on the top left portion of the screen to toggle between camera views. After the completion of the mission, view the earnings and mission statistics on the screen. Click Next to play the next level. Use the earnings to buy new and more dangerous helicopter in this Windows 8 shooting game.

This one of the best army warfare game available for Windows 8 right now. The graphics is in HD, and goes smoothly with the game. The sound effect is also great. Controlling the helicopter feels difficult in the beginning, but eventually you will start loving this Windows 8 shooting game.

Download Battle Of Atmosphere Supremacy for Windows 8 and 8.1 computers.