One Media Player is a free app for Windows 8 and Windows 8.1 devices which allows you to play back your music and video files without any hitches. When you launch the app, you can open up media files using the open file option in the control bars at the bottom of the screen, and once that’s done, you can start enjoying the playback of your music or video file which you have selected. The app runs very smoothly, and works in the background as well. What’s more, it also supports snapped view, thereby proving to be a perfect multitasking companion!

One Media Player supports a variety of audio and video formats, including .mp3, .ogg, .wav, .wma, .wmv, .mp4, .mpeg, .mpeg4, and a lot more. It can practically playback any common format media format that you throw at it. It’s available as a free download from the Windows App Store.

Features of One Media Player for Windows 8…

When you install and launch One Media Player on your Windows 8 or your Windows 8.1 device, you will be presented with an interface which looks like the below screenshot. As this is the first time we have opened the app, the main screen of the app is empty. Let’s add some files to the media library via the Open folder or the Open File button. As I wanted to add multiple files at once, I chose the Open Folder button and navigated to the folder where my media files were stored, and selected it to add the media files in one go. You can see that now my tracks were added to the play queue. The playback controls are present at the left side of the screen, including the seek bar, the play/pause buttons, and the next or previous track buttons which will allow you to control the various playback parameters. These all buttons are the same old stuff, so I’ll talk about a new feature here. If you look to the left side of the screen, you will be able to see a pink button next to the album art. This is the equalizer button. Clicking on it will allow you to control the tone and the pitch equalizer. Although not a new feature, this is a fairly new feature in metro apps, and I love the way how it has been implemented inside this app! You can either choose from a drop down list of preset and configured equalizers, or you can adjust the sliders to change each sound parameter manually. Overall, this is a nice feature to the app, and really makes a difference to the sound! You can also manage your playlists by clicking on the playlist name in the main screen of the app. A playlist automatically gets created when you add a music folder to the app. 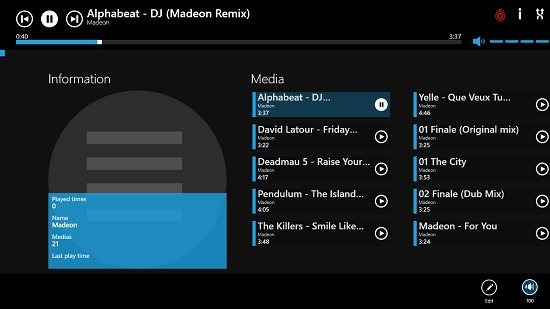 You can see the playback controls at the top. You can edit the playlist by clicking on the Edit button in the control bar at the bottom of the screen. If you look at the playback bar above, you will see a text label named i. When you click on this button, you will be able to see the information of the artist of the playing track. In the main screen of the app via the open file or the open folder buttons, you can also choose to open a video file, and when you choose to do so, you will be presented with a  full screen video playback of the file that you select. You can see the standard controls at the bottom of the screen which automatically fade out in some time. You can also click on the button next to the volume button to resize the video player to a miniature size. What’s more, the app also supports video playback while it is running in the background. This is a first that I have seen in media player apps, because usually the video just stops playing when you make the app run in the background. This is a nice feature if you have a video song but just want to listen to the audio while working on something else! The app also supports snapped mode, and that’s another plus!

This concludes the main features of this app! Have fun using this app!

One Media Player is a great app that you can have on your Windows 8 device to playback your media files. It is smooth, optimized for both touch and non touch screen devices, and supports a plethora of music and video formats. The app also supports snapped mode and background playback, thereby encouraging multitasking. I absolutely love this app, and would definitely recommend it to you guys as well!

Get One Media Player.