World Cup 2014 Free is a Windows 8 FIFA World Cup 2014 app. The app will provide you with all the required information that you need to know about these games. Information about the teams, the schedule that is to be followed, about the players from these teams, and other things is available through the app.

The app will turn out to be a useful tool for all the football enthusiasts who are looking forward to these games. It is freely available in the Sport category of the Windows Store. 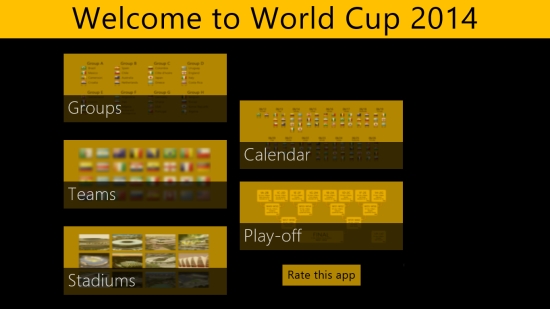 Before telling you more about the app, let me give you some information about FIFA World Cup 2014:

The FIFA World Cup is the world’s biggest single event sporting competition. It is contested by the senior men’s national teams  from 208 Member Associations of FIFA. The Competition started in 1930, and is played after every 4 years.

Now, let me tell you something about the app:

As you get to the main landing page of the app, the main options that are available through the app, will be available as rectangular tiles. These are mainly Groups, Teams, Stadiums, Calendars, and Play- Offs.

Teams have been grouped into 8 groups, A to H. 4 teams are included in each groups.

Get to the Teams option, and you would be shown all the teams taking part in the competition.

Click on any of the team to get details about the team. Click on the Current Squad option to get players details. Click on any of the player, and its details would be shown in a panel on the bottom right side.

Use the Stadiums option to see all the stadiums where the matches will be held. Get to any of the stadium to see details about the matches. Use this option to see the general play off scheme of the competition.

According to me, the app is a nice Windows 8 FIFA World Cup 2014 App. Use it to get all the information you need about the schedules, teams, and other information about the competition.