Cat Trap is a free puzzle game app for Windows 8 and 8.1 in which the cat has eaten your goldfish and you have to capture the cat to punish it. In the game, you have to click on the blocks surrounding the cat in order to capture the cat. The gameplay zone is made up of a lot of blocks which when clicked will activate and become a blockage. The aim is to surround the cat with blockages so that it can’t escape. The hard part is that the cat keeps jumping to random blocks when you click on a particular block, although it can jump only one block at a time. So you have to plan ahead and click on an appropriate box so that the cat doesn’t escape. If the cat escapes, it’s game over and you lose the game.

Cat Trap is available for free from the Windows App Store.

Main features of Cat Trap for Windows 8 and 8.1:

When you install and run the game on your device, be prepared to be presented with the following interface. You can simply click on the Play button to start the gameplay, or you can click on the How To Play button to be presented with the controls and other information about the game. The buttons have a nice hover effect so when you move your mouse cursor over them, a jumping cat appears over the button which makes for a nice cosmetic touch. The How To Play button when pressed will present you with information related to the game and how you can make use of the same. You can see this in the screenshot below. Click on the Back button at the bottom right of the screen to return to the main screen of the game, where you can now click on the Play button to start the game itself. The entire game is divided into multiple levels with progressive difficulty which makes for a fun but challenging experience at the same time. The first level is obviously Level 1, a screenshot of which is shown below. You can see the cat jumping over to a block in vicinity in the screenshot above. You have to prevent the cat from leaving the gameplay zone by clicking on the white boxes around it so that they turn blue and turn into blockages for the cat’s path. With each blockage that you activate, the cat jumps over a random block in the vicinity, so plan before hand which block you want to activate. If the cat escapes the game zone, it’s game over. You can see the time elapsed and the level number at the top right corner of the screen, and once the game is over, you are presented with the screen as shown in the screenshot below. 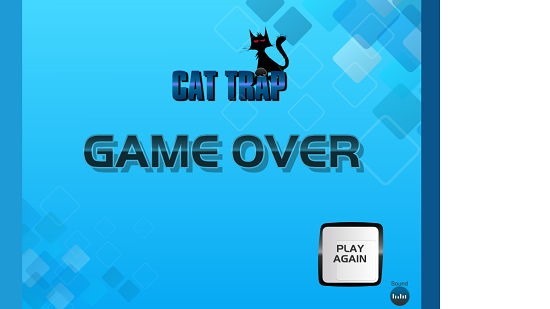 This sums up the main features of Cat Trap for Windows 8 and 8.1 devices.

Cat Trap is a great puzzle game for Windows 8 and 8.1 devices which puts a test to your wits and forces you to think harder. The game makes for a fun gameplay experience and can be downloaded for free from the link below.